Farmers from Noah Mkochi Model village under Champhira EPA in Mzimba South District are happy with the support they are receiving from ASWAp – SPII.

The project provided inputs for demonstration fields of different crops for the farmers to learn through participation. The farmers were also trained on gender main streaming, HHA, He 4 She campaign, nutrition and sanitation. ASWAp – SPII has also constructed a 6 km road for easy market access by the farmers.

Doctor Mkochi was all smiles as he narrated that he has already started enjoying the benefits of banana production and has earned MK36000 from selling just 12 banana suckers at MK3000 each. He thanks ASWAp for training and providing them with seed and suckers

On her part Mary Nyirongo said after being trained on soya beans double row cultivation, she has now increased production on a piece of land where she previously harvested 150 kgs but now gets  500kgs. The village consists 120 households and 149 farmers 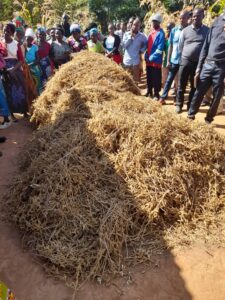 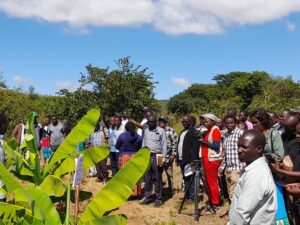