It never crossed his mind. As a smallholder farmer, Mickson Banda never thought he would see light at the end of the tunnel. The thought of pedaling a long distance on a rough-surfaced road to access a better market for his produce always left him exhausted. He always knew a good proportion of his produce would be lost to the poor conditioned road, but he had no choice. His only option was to face the challenge head-on. The hope of getting a penny from whatever little that would make it to the market was the only thing that kept him enduring.

It is true, farmers in rural areas of the country have always lamented the poor condition of roads which often limit their access to reliable markets. High transportation costs coupled with reduced produce quality and post-harvest losses due to poor roads often worry farmers as they detract from their incomes and profits. The country’s agriculture productivity heavily depends on farmers’ access to markets. Improving road networks in the country is therefore key, otherwise the future of our smallholder farmers will remain a blur.

Banda comes from Sitikali village in the area of Traditional Authority Chiseka in Lilongwe district. He usually takes the Mitundu-Kambanizithe road going to Mitundu Trading Centre to sell maize and sweet potato. The road was once in a bad shape that it used to give him a headache whenever he was walking it. For so long the road’s condition had been the biggest barrier between him and Mitundu market, the largest market in the area. He said the condition of the road was worsened during the rainy season; it was muddy and very difficult to pass.

“Accidents were common and most farmers, including myself, were losing their produce on the way. We were struggling to get to the market, at least to sell our produce at good prices,” he said.

He also lamented the high transportation cost that the poor-conditioned road caused. “We used to pay as high as K35, 000 to safely transport our produce from Katchale to Mitundu market,” he added.

Like the old days, on this particular day, Banda was on the same road heading to the market. He was carrying two bags of maize on his bicycle, but this time he was pushing the bike so effortlessly because the road bears a new face. Thanks to Agriculture Sector Wide Approach Support Project II (ASWAp-SPII). ASWAp-SPII had upgraded the Mitundu-Kambanizithe seven-kilometer road to low volume seal tarmac. The project is in one of its components ‘Improvement of Rural Road Infrastructure for Market Access’ committed to facilitating market access for farmers through improvement of road and bridge infrastructure.

“It never crossed my mind that one day I would be moving so easily on this road going to the market. Even the time it takes for us to reach the market with our produce has been reduced, we don’t take long to get to the market like before,” Banda said while smiling.

“Now that the road has been upgraded, taxi fare has reduced to K25, 000. With the reduced transportation costs, I am able to save some money for other purposes,” he added.

The new face of the road indeed lifted the burden off Banda’s shoulders. He was often burdened at the beginning and end of every growing season.  Whenever the growing season was approaching, he struggled to access the market to buy farm inputs. When the growing season ended, he was going through the same struggle to take his produce to the market. But all this is now a story of the past. Banda can now cycle to the market in no time, without even thinking of losing some of his produce on the way. He now has the hope of increasing his income because he is able to sell his produce at a better market with good prices.

Sitima couldn’t endure the pain of seeing his produce rot at home when a market was available somewhere. He had to risk both his bicycle and produce, cycling through the once rough-surfaced road to get to the market. He needed the money to support his family.

“Previously, the road was in very bad shape. Rocks were all over and there was grass everywhere. I couldn’t do otherwise but to pass through it even though it was risky,” he said.

The road is clear now and farmers can go to and from the market easily. They are no longer facing unnecessary delays on the road. They are now able to reach their destinations just in time.

“We used to take about three hours on a bicycle to get to Phalombe town. Now we take less than one hour because the road is in good shape,” added Sitima. 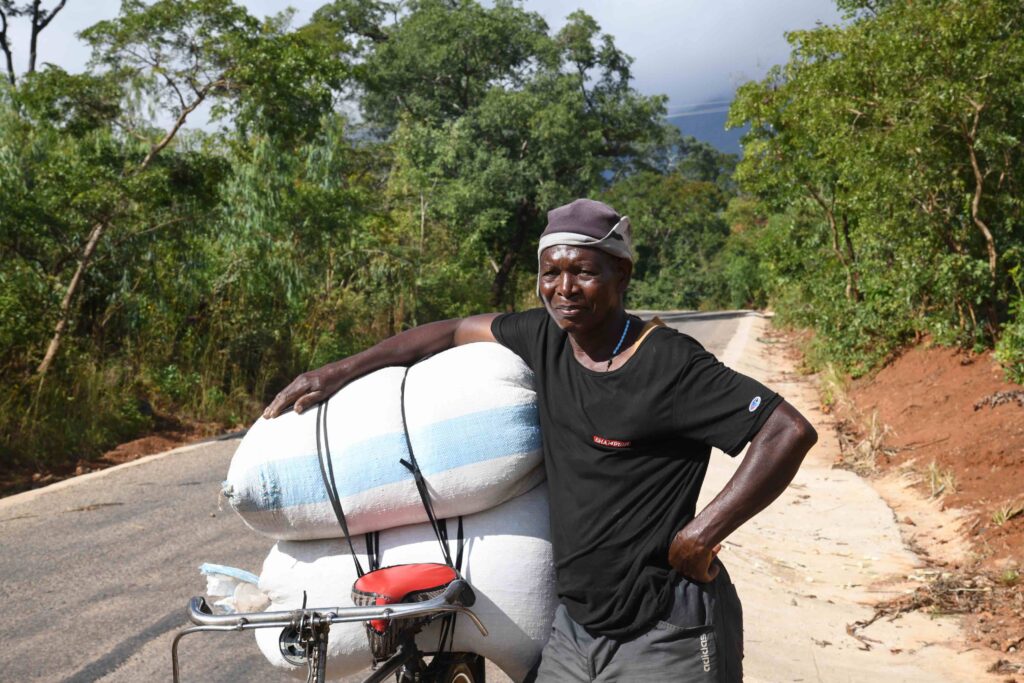 The improved road has also contributed to farmers’ wellbeing, especially to women. They can easily travel to the hospital and receive assistance in time.

“As women, we used to face a lot of challenges before this road was upgraded. Expectant women could deliver on the way before reaching the hospital, now it is history,” said Esther Matemba from Kalama village in Mpata.

She added, “We are also farmers, and we have several businesses; we sell bananas, fuelwood, and other produce to support our families. It was a challenge for us to transport our produce. Now that the road has been improved, taxis are everywhere and we easily take our produce to the market.”

ASWAp-SPII Desk Officer for Phalombe, Sam Mofolo, said the road is helping farmers around Mpata despite not reaching up to Nkhulambe area.

“We would like to thank ASWAp-SPII because it has helped to open market linkages through the construction of roads. Farmers are really appreciating because they are easily transporting their produce from production centers to markets,” said Mofolo.

In Mulanje district, ASWAp-SPII upgraded the Sayama-Manthambi seven-kilometer road using the low volume seal method. The initiative has gone a long way in putting a smile on the face of transporters. A group of transporters from Sayama turn-off in Mulanje have hailed the project for easing their movement whenever they are carrying people as well as farm produce from one place to another.

Jonas Mokotha, one of the transporters said, “Previously, this road was very bad, our businesses were not doing fine. We were forced to take a longer route just to run away from this road because it was muddy and difficult to pass.”

The transporters are now happy because the road is smooth and they are now getting more customers than before, a plus to their income.

ASWAp-SP II is being implemented in 12 districts of the country with funding from the European Union (EU), United States Agency for International Development (USAID), Norwegian Government, Irish Aid, and the Flanders under the Multi-Donor Trust Fund (MDTF) administered by the World Bank.

The project, through its roads improvement component, has increased rural farmers’ access to reliable markets. This initiative is playing a significant role in contributing to increased agricultural productivity in the country.